PROBLEMS I AM HAVING WITH MOLD

PROBLEMS I AM HAVING WITH MOLD

I have had issues recently and am curious if I am doing something wrong or if these issues are bugs...

1. If I use a Progressive EP500L10 ejector pin in a "keyed" situation, the pocket that orients the pin is not made. I get the pocket if I simply switch to a DME-THX33010 pin.

2. When mold bases come from the DME library or if "DME" screws are added they are shown (incorrect) as fully threaded. (for example a 5/8-11 UNC SHCS). The same screw from the Progressive library is shown correctly as a partially threaded screw.

3. I created a "non-standard" mold base. It seems that if I try to install "stop pins" I can only get them to install into the lower clamp plate. If I try to install them into the ejection plate there is a problem with "cyclic reference between elements"... Any way to get this to work as it should ?

4. This is more of an enhancement request and I will post it there pending the result of some of these other issues... Support pillars could be easier to create. The DME and Progressive catalogs show the style retained by a SHCS and this is all that we use here but in TopSolid for some reason the pillar comes in with no screw. This item exists in the DME library but not in the Progressive library.

I generally prefer the Progressive library when it is available because the names of the components make a lot more sense. For example, it is a lot easier to figure out what an EP500L10 is but a THX33010 is a lot less helpful. This brings me to another important observation. Often while choosing components in TopSolid it is difficult to know what size a component is... See attached picture and note that there is nothing that tells me a DME 5208-GL is 1.0 diameter and 6.75 long. My choices are to use trial and error until I get what I need or keep the DME catalog on my desk and look up every component.

I know that Missler has been improving the components with patches but this area needs some attention ! 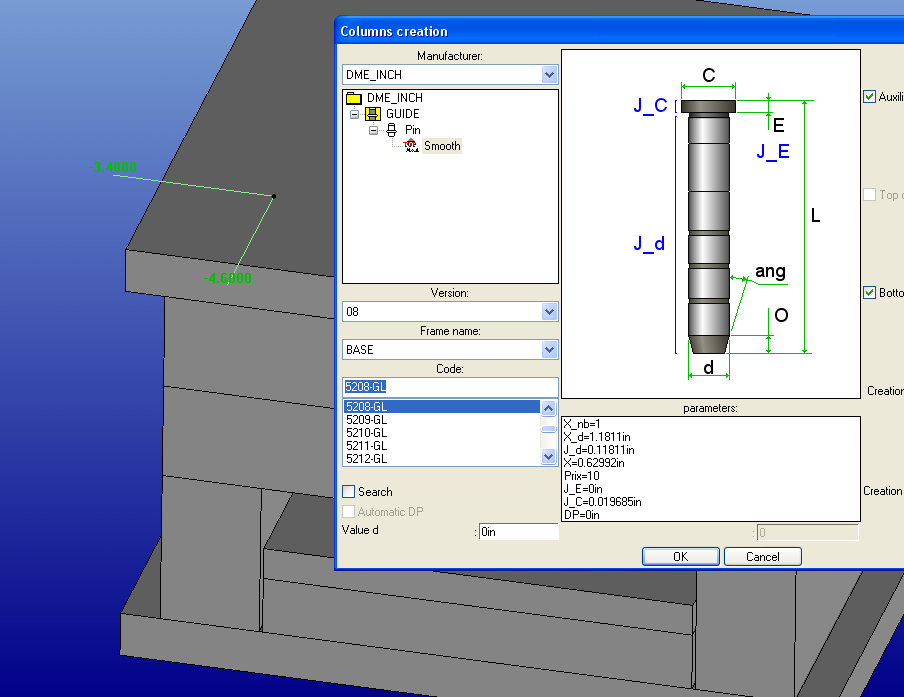 2-yes DME screw came full trhraed we know it's wrong they should improve-it , bcs you modify manualy or you leave it as that, it doen't affect the concept.
3- When you select the stop pin the position face have to be always the BCP but on the stop pin menu you have to select invert and the hole of the stop pin will be made in the EJ PL
I use always pilars from DME and I add my own screw 1/4 5/16 3/8 depends of...
4 When you put a Leader Pin if you put a minimum dia of 1-1/4 you could see the difference beetween the first number who indicate the difference of the dia, for the length if you assign the good limitation by the plate the will give you always the maximum long pin, but you could reduce by choosing a smaller #

Hope that will help you
Top

#2, I know it doesn't affect the design but for visualization it makes a lot of sense to have the bolt be correct so we can visually see if the best bolt selection has been made.

#3, I almost wasn't able to find the "invert" even after reading your post but finally I saw it under the "Frame Name" dropdown. I would have never found it there.

#4, Thanks but I think it would make much more sense to have the "D" appear in the box with the rest of the parameters whenever a component is selected under "code".
Top

#4 I think it's a very good idea to have the window show L & D at the top of the window. Just a nice confirmation for the user we're getting what we want.
Top

#3. Thanks for the "heads-up" Larry. I actually did notice that one but it could be easily overlooked.
Top

The problem with the keyed progressive pins is in the progressive library. The entire ej pin library isn't complete.
You can however make it work you have to modify the pin after you create it. Change the r, t1, and L5 values(these are the values that control the keyed pocket) to match the pin and then regen. You will then get the keyed pocket for the progressive pins. And yes you have to do this individually for every size of pin you have installed.
This is a major hassle, and should be a very quick fix if they just copy the r, t1, and L5 values from the dme library over to the progressive library. They have been aware of this for at least 6 months so hopefully the "library guy" can get to this before long
Top

I tried this with a Progressive Ejector Sleeve. I couldn't make it work correctly... I did successfully modify the values but no amount of regenerating would actually create a pocket... I had to unblank the "tool" and manually subtract it from the ejector plate...

I sure hope Missler can fix this library soon because I really prefer to work with Progressive components.
Top

So I recieved word from the dev team that the keyed Progressive Pins will be corrected in the patch after the 212 patch (coming soon).

The missling sleeve ejectors will be added as well.

a Correction will be made to component ES500L

Just an FYI for all of you.
Happy Designing
Bill
Technical Director
Missler Software Inc
Top

Thanks for letting us know !