When we want to add/remove material only a in a few faces of a solid, we can use the modify face tool, when the faces to modify are "translated". Many times de result should be an offset of the selected faces. Those who are using the TopSolid'Mold or TopSolid'Electrode, have a good tool to do this ("create clearance" in TopSolid'Mold and "Add/Remove Material" in TopSolid'Electrode). Now to achieve this in TopSolid we need to offset the part using a general value of 0 and then using a special value to the faces that we want to modify.
I think that a tool called "Modify face - Offset" should be add in the TopSolid'Design.

I have often wished that I could use the "create clearance" function in TopSolid Design.
Top

It works great for me, and this operation remain on the construction tree.
TopSolid Users!!!!
Top

I think the add/remove stock command should just be part of the standard TopSolid package. You already can do it, why not just make it easier for the users.
Top

your solution is OK when the faces are planar. Now imagine a cube with a fillet in an edge. I need to offset the two faces tangent to the fillet AND the fillet. I can not do it with the modify face operation 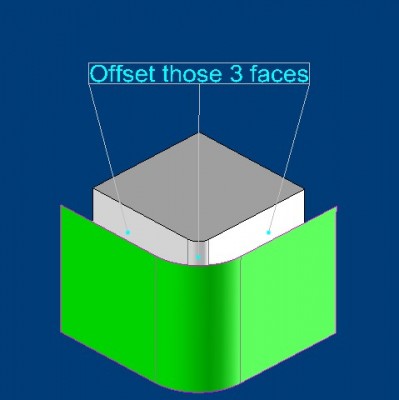 I made this file using Modify face associative and parameters.

I understood it is not what you really want, but maybe this can bring you new ideas

What a work, just to offset 3 faces

Maybe next version (or patch) will help us.
Like Larry M. said, we already can do it (with the offset function), so, why not simplify the use of TopSolid.

I agree with Olaio and TopSolid2007, and is a option that we ask for it a long time already...

I agree with olaio, if you could do one operation, why do you have to do tree or more operations to do the same!?
Top
Post Reply
9 posts • Page 1 of 1